The earliest attempt to commemorate the Sidman fortifications had its inception in 1903 when James Bogert Suffern of Hillburn, a greatgrandson of the taverner, and his wife Sarah donated about a quarter of an acre of ground (7,183 square feet) in Fox Hollow to the New Jersey State Society of the Daughters of the Revolution "upon the express condition that the above premises shall be used for the preservation of the Revolutionary entrenchments thereon situated."

The Daughters, a local group chartered in 1898 and based at Ridgewood, New Jersey, operated as the Ramapo Valley Chapter and on June 28, 1904, dedicated a polished granite tablet fastened on a huge boulder on the earthworks at a ceremony attended by about 500 people at which Mr. Suffern and Clarence Lexow of Nyack delivered the principal addresses. The tablet and boulder are on the west side of Route 17, which is now routed through the hollow, and the inscription reads:

A. D. 1904
This tablet marks the site of
the post at Ramapough or Sidman's Bridge.
Erected by the
Ramapo Valley Chapter of Daughters of the Revolution
in honor of the officers and soldiers of
the Revolutionary War who were
stationed herefrom 1776 to 1781. 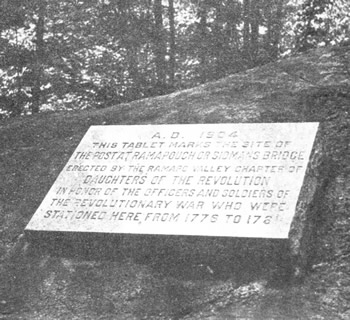 GRANITE TABLET erected in 1904 by the Daughters of the Revolution in Fox Hollow at Hillburn, Rockland County, to commemorate the military post at Sidman's bridge. The site on Route 17 is now owned by the Historical Society of Rockland County. Photograph by John Scott.

Annual observances by the Daughters were held at the site in June, with a short ceremony at which an ancestral roll of members was called and a spray of evergreen and oak, emblem of the Chapter, was placed on the rock. With an aging and declining membership, the pilgrimages gradually became increasingly difficult, and in 1979 the few remaining members transferred ownership of the ground to the Historical Society of Rockland County, which now maintains the site. The Ramapo Valley Chapter is no longer active and the last ladies involved are deceased.

In 1922, another tablet - this one of bronze mounted on a stone - was erected by the Rockland County Society on the line of Machin's entrenchment on the so-called "quarantine ground" on the west side of Torne Valley Road, close by the railroad and Route 59. The tablet was unveiled by little Eleanor Zabriskie of Suffern on property then owned by General J. Fred Pierson, and reads:

Erected May 13, 1922
Site of
Camp Ramapough and intrenchments
where Revolutionary troops were
stationed in 1776 and 1777. The
military works were erected by
General Washington to protect
the line of communication through
the Ramapo Pass. 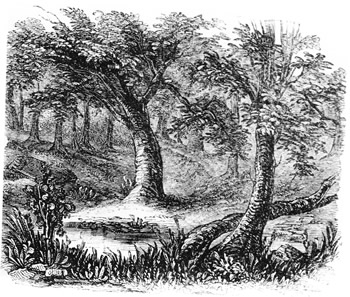