To understand much of what went on, one must know the region. Smith's Clove, extending from its southern entrance at in Rockland County to its northern at Mountainville in Orange, was flanked for much of the way along its easterly side by the scenic lands of what is now the Palisades Interstate Park and the extensive domain of the Harriman estate. It was of ample width and broad enough in the mid-valley to allow extensive tillage, but at two points - at Woodbury Falls within the northern mouth and at Ramapo within the southern - it narrowed to funnel-like defiles barely wide enough to allow the passage of both a road and a narrow waterway.

From either side of the divide in the valley bottom at Harriman, the divergent courses of Woodbury Creek and the Ramapo River, swelled by streams descending from mountain ponds, made their ways in opposite directions, north and south, through the pass and out of the mountains.

Revolutionary War letters and diaries are replete with allusions to it as Smith's Clove, but though the name was generously given to the entire pass, it was originally applied in a more restrictive sense to the northern and mid-valley region, which was divided into Upper Smith's Clove and Lower Smith's Clove - the Upper, extending from the northern mouth into the corridor towards Woodbury Falls and HighlandMills, and the Lower - the true heart of the Clove - ranging across the undulating country of Arden, Harriman, Central Valley, and Monroe, where the valley flattened into a gentle terrain rimmed by hills that permitted easy access to the Chester and Blooming Grove country beyond the head of the Clove at Monroe. An army surgeon during the Revolution called it "a fine level of plain rich land" cultivated by a few families who found "profitable employment in cultivating the fertile soil."

As for the name, the Upper derived its identity from Thomas Smith who settled at Mountainville in the first half of the 18th-century, and the Lower, from David Smith who established himself as a miller at Monroe and is better known, in the periphery of the local scene, as the father of Claudius who was hanged on a winter day at Goshen.

When Cornwall was divided in 1799 and the short-lived Town of Chesekook (Cheesecock) was established in Lower Smith's Clove, the region still continued as Smith's Clove - unofficially, that is - until the name changed to Southfield in 1801 and Monroe in 1808. The old name, however, did not die easily. Upper Smith's Clove as a name fell into disuse with the disappearance of the several members of the Smith family, but maps of the 1850s still designate the Central Valley terrain as "Lower Smith Clove", and even today "Smith's Clove" remains a popular place name reflective of its past.

Other sections of the valley also carried localized names. Upper Smith's Clove, even before the Revolution, was intermittently called Woodbury Clove and sometimes Schunemunk Clove; while the lower valley, through which the Ramapo made its way, was muchly alluded to as Sidman's Clove from a family of that name and sometimes as Ramapo Clove. More often than not, despite its variety of nomenclature, the long corridor from end to end was merely called The Clove. By the mid- 19th-century it was widely distinguished in romantic literature and in half-legendary lore, as the Ramapo Pass, and today as the Ramapo Valley.

Until 1798 all of Smith's Clove lay within Orange and twenty of its twenty-three miles within the extensive confines of the political entity known in colonial days as the Precinct of New Cornwall (mostly shortened to Precinct of Cornwall), which had been erected in 1764 with a division of the older Precinct of Goshen, extending across-county from the Goshen lands to the Hudson, and from the northern Orange boundary at Murderers (now Moodna) Creek to the southern precinct line at the Slot (now Sloat) farm at Sloatsburg. The three miles of the lower Clove below Slot's lay within the Precinct of Haverstraw, which dated back to 1719 and encompassed the greater part of what is now Rockland. 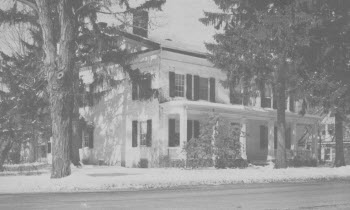 Sloat House. The main building of the Sloat hostelry and family residence, at the corner of Orange Turnpike and Sterling Avenue in Sloatsburg. The rear wing is believed to be part of the original building. Photographs by the author, 1980.

The great extent of Cornwall precinct can be better appreciated, perhaps, with a realization that within its one-time original limits are now established the modern Orange townships of Monroe, Blooming Grove, Highlands, Woodbury, and Tuxedo, a reduced town of Cornwall, and parts of Chester and Hamptonburgh; and in adjacent Rockland a part of Ramapo township. The designation "precinct," once of well-known usage in the colonial county system, was done away with in 1788 and in its place came the now-prevalent term "township."