Part I:
The Country and Precinct
Chapter 4:
The Clove Taverns I: Suffern's, Sidman's, Slot's

In days of slow travel on foot or horseback or in horsedrawn vehicles, the welcome sight of a public house was enough of an inducement for a traveler to partake a restful interlude to slacken his thirst on what could otherwise be a wearisome journey. The flow of people along the Clove highway brought about the establishment of hostelries which doubled as domiciles for their proprietors and places of accommodation for the traveler.

The seven along the road - Suffern's, Sidman's, Slot's (later Sloat's), Galloway's, June's, Smith's and Earl's - were roadside landmarks in their day. Situated usually in proximity to road intersections, they were centers of social and political life where their landlords were purveyors of information and late news and were generally considered people of repute.

For some, the dispensing of hospitality was but one facet of their activity. Two of the Clove innkeepers were Cornwall militia captains, Earl had a mill, the Sloats later went into manufacturing, and Suffern, most expansive of the lot, burgeoned tavern keeping into profitable business and landowning enterprises. Besides this, Suffern and Sloat also had their names given to the localities where they settled.

Allusions to the taverns as military stations and focal points for troop deployment were frequent in wartime correspondence, diaries, and orderly books; but while public houses such as Suffern's and Slot's are well documented and their locations known with precision, others have been recorded in vague or misleading fashion. Inasmuch as considerable activity centered about them during the Revolution, their individual identities are deserving of more than casual interest. Going north from the southerly entrance of the Clove, they were:

In 1773, thirty-one-year-old John Suffern (1741-1836), native of Antrim in northern Ireland and already ten years in America, settled with his wife and three children at the Point of the Mountain and erected a commodious dwelling of Dutch colonial design, forty by forty-five feet in size, at the northwest corner of what is now Washington and Lafayette avenues in Suffern, and to the locality he gave the name New Antrim. 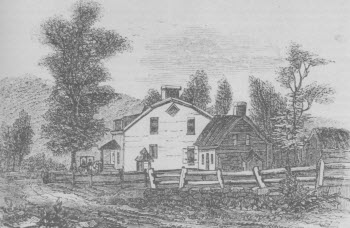 Suffern's Tavern, corner of Washington and Lafayette Avenues in Suffern. Woodblock engraving by Benson John Lossing (18131891) from a sketch by William McLeod (or MacLeod), published in 1851 in Harpers New York and Erie Rail-Road Guide Book, five years before the tavern was demolished.

Of the several Clove taverns that operated during the Revolutionary War, Suffern's was to become the most noted, primarily because of its advantageous location at a road junction where the Clove Road joined three other highways leading into New Jersey and into lower Orange and towards the Hudson, and because of this it was able to service traffic approaching from all directions.

Here, in a building that served as home, store, and tavern, the New Antrim landlord encountered every general of the Continental Army, and mention of it was profuse in letters and documents throughout the war. Washington was here for five days in July 1777; he was here momentarily in November 1779; and in August 1781 the Comte de Rochambeau established his quarters here during a two-day stopover of the French army on the march to Yorktown.

Suffern's repute expanded after the war. Always on the lookout for enterprising ventures, he prospered in his long life as a businessman, ironmaster, miller, landowner, postmaster, judge, county treasurer and state assemblyman and senator. In 1841, five years after his death, the settlement was renamed Suffern with the coming of the Erie Railroad, and in 1856 the tavern was demolished. The site is marked by a tablet on Washington Avenue erected by the Rockland County Society in 1924.

Three miles within the Clove, the solitary tavern of Samuel Sidman (Sydenham, c. 1720- 1777/78) stood on the east side of the road on a low rise of ground near the Ramapo below Sloatsburg. Sidman, New York born and living there when he entered into the bond of matrimony, began his association with the Clove in 1746 when, in the Dutch church at Acquackanonk in New Jersey, he married Angneitje Van Deusen (1724-1798), a daughter of Isaac Van Deusen, the younger (1698-1792), who had come to Ramapo Clove with his father and settled on land purchased from the Indians in 1724 by John Van Blarcum. 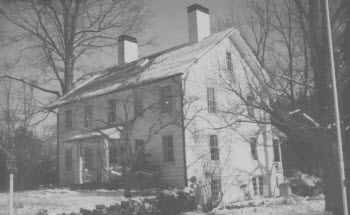 Sidman's Tavern. Route 17 skirts the easterly side of the knoll in which the Van Deusen-Sidman tavern stood, and bypasses the old Clove Road slightly to the west. Pinned oak timbers attest to the age of the frame building on the site, the northerly part of which is believed to be part of the 18th-century hostelry. John G. Smith, who married Sidman's daughter prior to 1789, succeeded his father-in-law as the tavern proprietor, and about 1816 added about twelve feet to the building. It continued in Smith ownership until acquired by the Pierson family later in the 19th-century. This photograph taken in 1988 by Claire Tholl shows the west front of the building which faced the Revolutionary War road.

The beginning of the tavern started with Van Deusen, and among those who entered his wilderness abode was the surveyor Charles Clinton who, as he put it, "lodged at Van Duzers (sic) in ye Clove" in 1739 during the course of his fourteen-year Cheesecock survey. The house took on a broader identity when Angneitje brought Samuel back to Ramapo where she had been born and would spend her entire life.

Isaac Van Deusen, both farmer and tavern keeper, owned over 2,000 acres of land in Haverstraw precinct and 1,000 in Cornwall, and two years after his daughters marriage he removed into what would become Cornwall and turned his tavern over to Samuel and divided his holdings between his two sons-in-law, with Samuel coming into ownership of the eastern end of the tract.

When Jeffery Amherst stopped overnight in 1761 - certainly, as conqueror of Canada, a distinguished guest - Sidman's name was already well attached to the house; but the innkeepers worth was reflected in a much broader sense in that the lower valley itself between Sloatsburg and Suffern took the name Sidman's Clove, as did Sidman's Bridge where the Clove Road crossed the Ramapo a mile below the house. When Cornwall precinct came into existence in 1764, the precinct line followed the north end of Sidman's farm and his property became the most northerly in the Clove within the bounds of the Precinct of Haverstraw.

Sidman, like John Suffern and other innkeepers in the valley, was a signer in 1775 of the General Association which pledged support of the Continental Congress, and after his death in late 1777 or in 1778, the tavern became that of the "Widow Sidman." The proximity of the building to the nearby military defenses erected at Sidman's Bridge made the inn a readily available and important station for officers on duty there.

One mile north of Sidman's and across the precinct line in lower Cornwall stood the hostelry of Stephen Slot (1725-1806), native of northern New Jersey and descended from Jan Pietersen Slot who had settled at New Haerlem on the island of Manhattan in the 17th-century. The family name was Slot (or Slott) until changed to its anglicized version of Sloat in the closing years of the 18th-century with the maturation of a new generation. 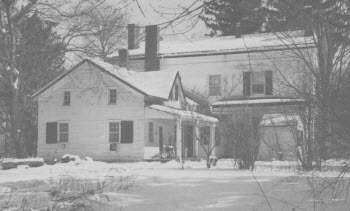 Sloat House. Also see image of Sloat home in Chapter 3. The rear wing of the Sloat hostelry and family residence, at the corner of Orange Turnpike and Sterling Avenue in Sloatsburg. The rear wing is believed to be part of the original building. Photographs by the author, 1980.

A special family bond joined Sidman and Slot in that the neighboring taverners were brothers-in-law by marriage to two daughters of Isaac Van Deusen. Bergen County-born, Stephen was in his late twenties in the 1750s when he married Marretje Van Deusen (1729-1807) and settled on a tract of land in the Clove at Sloatsburg conveyed to him in 1763 by his father-in-law. Here, in a dwelling on the west side of the main highway (Route 17), a few hundred feet below its junction with the Ringwood Road (now Eagle Valley Road), he and Marretje opened a tavern, farmed and raised a family of four children.

In addition to the amenities of lodging and cheer, the location of the tavern within easy reach of the Clove entrance contributed, no doubt, to its selection as a convenient mid-point meeting place for the transaction of public business involving northern and southern Orange; most notably, the meeting of all the Orange committees that was held at Slot's on August 16, 1774, where Henry Wisner and John Haring were chosen delegates "from this County" to attend the General Congress of the Colonies - the first Continental Congress - scheduled to assemble at Philadelphia in September.

Slot's importance was apparent in September 1775 when he was commissioned captain in command of "a New Company set off in the South westerly parts of the precinct of Cornwall" to serve in Colonel Jesse Woodhull's regiment of Orange militia. In June 1779 Washington stopped overnight at the tavern when the army was moving into the Clove to counter the British occupation of Stony Point.

For years after the Revolution, it continued as an important gathering place. In 1798 the two committees representing northern and southern Orange met here to finalize details for the partition of the county and the creation of Rockland, whereby the first county line (1798-1801) followed the south boundary of the Slot farm. Slot's - by now changing to Sloat's - was a regular stop on the New York to Albany stage route well into the 19th-century, and until 1821 served as a meeting place for sessions of supervisors and judges of both counties who gathered to examine public papers and accounts.

The main body of the substantial two-story stone and brick dwelling at the corner of Orange Turnpike (Route 17) and Sterling Avenue in Sloatsburg, long a public house and residence of the Sloat family, is an enlargement of the building designated by Erskine as "Slott's Tavern", and was erected, it is believed, around 1813 by Stephen Slot's son, Isaac, but the low rear wing may be part of the original 18th-century structure in which Stephen dispensed hospitality.