Part IV:
1779: A Crucial Year
Chapter 6: Among the Rocks and Rattlesnakes

In the paradox of the situation, both Washington and Sir Henry Clinton were playing a cautious game, each awaiting movement by the other. Clinton, lacking the strength he needed, did not want to fight inside the Highlands and Washington, for the same reason, did not wish to venture from the mountains. In 1900, Henry Phelps Johnston, in his appraisal of what happened, presented an admirable summation in his The Storming of Stony Point: "The true master of the situation was Washington. His strength lay in his immobility; it lay in that unerring judgment and rare poise that enabled him to dismiss any passing inclination to defer to the usual risks of war and accept the enemy's repeated challenge. He was not likely to indulge in the 'false move' which Clinton had hoped his own maneuver might, sooner or later, lead him to make. Why should he attempt the recovery of King's Ferry with the heavy losses involved, and, in case of failure, the serious weakening of his West Point defensive? Why now should he march into Connecticut only to find her towns burned? Like Clinton, he measured his force. It was strong enough to take the field." The region in which the army was encamped aroused strong emotions. James Thacher, surgeon in the 1st Virginia on station with Stirling's division, described the Clove on June 7 as "a fine level plain of rich land" where the "few families who reside here find a profitable employment in cultivating the fertile soil."

Others, however, found it different. Colonel Jeremiah Wadsworth, deputy commissary-general of purchases, painted a broader and more chilling picture in a letter from "Camp Smith's Clove": "This is the most villainous country, rough, Rocky and a bad climate. Rattle snakes & Robbers are plenty. It was an infringement on the right of wild Beasts for man ever to enter this Clove. it ought to have remained as Nature certainly intended it for the sole use of snakes adders & Beasts of prey".

Nathanael Greene, who looked upon it as barren land, added another touch: "This is a most disagreeable place infested with Snakes and all manner of disagreeable things. I am now writing in a Markee [marquee] not ten Yards from which a large Rattle Snake was kild but a few minutes since."

Nor were the mountains enticing. Greene wrote at one point: "A rougher country Nature never formed; neither is it in the power of imagination to exceed it in conception." Soldiers were enraptured by the Hudson Highlands, but they hated duty there. Dr. Thacher journeyed to West Point a couple of times and called attention to the thick wilderness and "rocky mountains almost impassable for our horses", to the vast number of huge rocks and brooks winding in every direction among clefts and precipices, and to narrow and rugged paths that "probably will not again be traversed but by savages and wild beasts."

Captain Francis Smith's roadside tavern at the boundary between the present villages of Central Valley and Highland Mills served as Continental headquarters for two weeks, but for half of the time the commander-in-chief was absent at West Point, ten miles away, or in reconnaissance to resist attack. His journeys back and forth, no doubt, were mostly by way of the convenient crossroad, now Park Avenue, that branched at Earl's tavern at Highland Mills, half-a-mile from headquarters. An entry in the headquarters expense account indicates payment to Francis Smith on June 19 of £15 4s for nineteen dinners. During Washington's absence, in accordance with orders posted on June 14, Major-General Putnam was designated commanding officer of the army in the Clove. 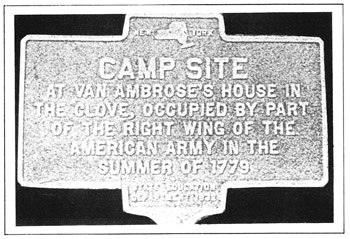 AMERICAN CAMP MARKER Roadside marker erected by the New York State Education Department in 1932 to mark one of the Clove camps occupied by Washington's troops in June and July 1779. Located on the west side of Route 32 in Central Valley opposite the Central Valley Ambulance Corps and adjacent to the Gasho of Japan restaurant and to the "Aaron Burr house" at 340 Route 32. While properly marking one of the division camps, the intimation that the ground was also the site of the Van Ambrose dwelling is misleading, insofar as the Widow Van Ambrose's home was located three miles farther north on Route 32 opposite Trout Brook Road in Woodbury Valley where St. Clair's Pennsylvania division was stationed.

Other officers made-do as best as possible as far as shelter was concerned, most of them probably in tents along with the men. Greene had a marquee near the tavern; Stirling, a good drinking man, was on record in September as having quarters at June's, and it is more than probable that Earl's tavern and the Van Ambrose house were also utilized for military use. Letters from the soldiers were usually couched as being written from "Camp at Smith's Clove."

Greene had something to offer on this particular subject when he wrote to a deputy at Philadelphia: "I am in a very disagreeable situation for want of a good markee [marquee]. There is no House to be had for quarters in this neighborhood and every man is obliged to confine himself to his Tent, wet or dry, hot or cold. This what I have got is without fly or inner tent, and has many holes in it, which makes it very uncomfortable to live in. Besides my papers are wet and all business at a stand when it rains.

He no sooner was settled near headquarters than he was busy rounding up supplies and prodding deputies to forward provisions and enough meat to subsist the army for at least one week in case the fat cattle he was expecting from New England did not arrive; and to make sure that enough grain was sent to the mouth of the Clove to feed the cattle that would have to be used to transport stores from Suffern's to the encampments, because "No forage is to be had in all that distance". This is what he meant when he referred to it as the barren Clove.

Despite the vigorous measures already taken to apprehend the robbers and villains in the Clove, the plunderers still remained a serious problem and even the presence of three army divisions was not sufficient to quell the activity of the more enterprising and foolhardy predators. On June 12, four days after Claudius Smith's son, James, had been hanged at Goshen, Greene was writing about the supervision of supply routes and in a postscript to his letter added a telling bit of late news: "We had an alert this morning from out piquets; but it turned out to be a false one, being nothing more than a party of Mountaineers attempting to take off a patrole."

There is little doubt the surreptitious "mountaineers" were cohorts of "the noted Clove gang," but the audacious attack was not regarded lightly by the military and within short time there was a speedy roundup and imprisonment of anybody suspect; and that the problem was considered at high level was evident in Washington's General Orders issued at Smith's tavern on June 14, wherein Putnam was instructed to assemble the general officers to examine into the circumstances attending the "suspected persons lately taken up in the vicinity of this camp," and they were to report to the commander-in-chief their opinion of the proper measures to be pursued. The task of bringing in witnesses was assigned to the adjutant-general.

Seven days later, as he was making ready to leave Francis Smith's hostelry for the open confines of New Windsor, Washington requested Putnam to complete the investigation as speedily as possible in order that those in confinement could either be punished, released or transferred to the civil authority, or, "if guilty, the sooner they are made an example of, the better; if innocent, 'tis a pity they should suffer a tedious confinement." The prolonged crackdown was still apparent on July 14 when General Orders directed the small parties detached from the brigades at West Point "for the purpose of apprehending robbers and other disorderly persons in and near Smith's Clove" to rejoin their respective regiments.