By 1780, the main theater of the war had shifted to the South and the broad sweep of campaigning and contention between armies that had characterized the earlier years in the North was gone but the Hudson remained the strategic center where Washington and the Grand Army kept vigil on the British in New York. Enemy incursions into northern New Jersey continued, but, save for the hard-fought battles at Springfield in June 1780, were mostly local irritants that were successfully contested by the militia and troops on the ground. 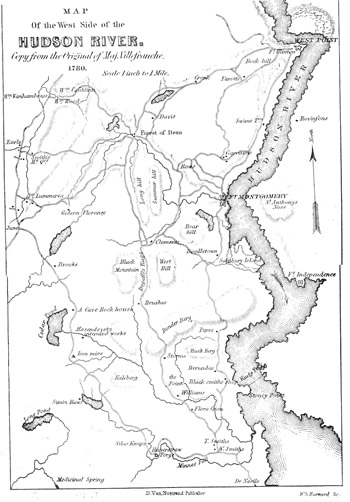 Map of West Point and the country west of the Hudson River 1780. Facsimile engraving by William S. Barnard, 1863, from the original manuscript map by Jean Louis Ambroise de Genton, Chevalier de Villefranche (1747-?), Major of Engineers, Continental Army, and published by D. VanNostrand in E.S. Botnton, History of West Point. Villefranche's map is especially valuable in delineating many of the interior mountain roads between the river and Smith's Clove at the left which do not appear on extant Erskine charts.

The winter of 1779-80 gone, the first intimation of military activity at the Clove in early 1780 became evident when Brigadier-General James Clinton and the 1,100-man New York brigade, departing Morristown for King's Ferry and northern New York, arrived at Ramapo on June 1 and camped for the night and on the next day, on departing, left a detachment at the Clove for security under Captain John Johnson of the 5th New York, who remained there for the next seven weeks.

The puzzling Springfield battles that opened the campaign a few days later, though seemingly a localized affair directed at Morristown and contested thirty miles from the Clove, suddenly gave indication of developing into a thrust towards West Point and lower Orange that, if pursued to the extent it was briefly considered by the British high command, could have brought both armies to the Clove and made the corridor entrance at Suffern's tavern a point of contention in the maneuvering of the hostile forces. The operation started, simply enough, on June 7 when 5,000 enemy troops under Lieutenant-General the Baron Wilhelm von Knyphausen crossed from Staten Island and pushed towards Morristown, but after gaining no more than seven miles of heavily contested Jersey soil were stopped at Springfield and forced back to Elizabethtown.

During the two weeks that followed, Washington pondered the situation, suspecting the enemy offensive only a diversion intended to draw attention away from the Hudson and West Point, which he believed was the British objective. Anticipating this, he ordered Clinton's brigade to return to the Highlands from the north, and four days later was reiterating his familiar theme of 1777, when in the Clove, that the situation was embarrassing. On the twentieth, apprised of enemy naval activity on the river, he ordered an officer and a dragoon detail posted at King's Ferry to report the appearance of any hostile ships.

His apprehension for the Highlands was strengthened all the more on June 22 when he received word from Greene at Springfield, who in turn had it from a spy, that 3,000 British troops were to embark for King's Ferry, and another column was to advance by land from Elizabethtown through Newark and Sloterdam (now Passaic) into Bergen and Orange and towards the ferry with intent, Greene said, "to cut off your Excellency from the mouth of the Clove and prevent your getting into West Point."

Almost certain that this was the enemy's intent, Washington divided the army and, leaving a strong force at Springfield to block the Morristown approach from the British still at Elizabethtown, started moving with the greater part of his army towards Pompton and Suffern's, from where, if need be, he could move through the Clove and into the Point. Brigadier-General Jedediah Huntington, who, as a colonel, had fortified the Clove four years earlier, hurried forward with his Connecticut troops to cover the entrance, where Captain Johnson and his small New York guard was on duty. On June 25, the commander-in-chief was writing that Huntington was then "some way" on his march. On the next day Washington himself reached Ramapo below Suffern's and headquartered at the Hopper house on Valley Road (now Route 202) at Mahwah where he remained for five days.