A brief glimpse into a tranquil side of life in the wartime corridor, fortunately, is to be had in the noted journal of Francois-Jean de Beauvoir, Chevalier de Chastellux (1732-1788), marechal de camp under Rochambeau, during the course of a journey from Philadelphia to New Windsor in December 1780. Wit, philosopher, playwright, author and man of letters and praised by Washington as a gentleman of merit, knowledge and agreeable manners, he traveled the highways of revolutionary America with the insatiable curiosity of a foreigner to know the American scene and the people whom the army of His Most Christian Majesty had come to assist.

After spending a night at the Yellow House tavern at Pompton where the Jersey brigade was settled in, Chastellux set forth for New Windsor on December 19 by the Ringwood road leading to the Clove with which, he said, nobody seemed to be too familiar. Traveling by horse with servants and baggage, he stopped at the ironworks to seek directions of Elizabeth Erskine and a recommendation of some inn or hospitable home where he could spend the next night, and on departing accepted a glass of Madeira to speed his journey as was the custom of the country. 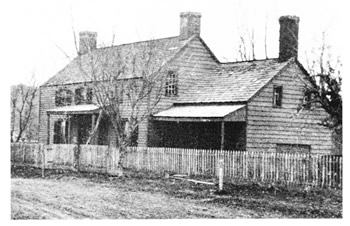 YELLOW HOUSE TAVERN formerly located on Wanaque Avenue at the intersection with Passaic Avenue and the Paterson and Hamburg Turnpike, Pompton Plains, New Jersey. Situated on the great road between the Hudson and Delaware, thirty miles from King's Ferry and twenty from Morristown, and adjacent to the Pompton entrance to Smith's Clove, Joseph Curtis advertised his tavern as a quiet house where travelers could feel at home and "find English fare in a Dutch country", with well-tended stables for twenty horses and having for perusal the newspapers of three different printers and a small collection of books - which included, one traveler said, books by Milton, Addison, Richardson and others. Stopping here in 1780, the Chevalier de Chastellux was quite impressed, describing Curtis as a twenty-four year-old youth from Morristown who had recently leased the house and barn and two or three acres for eighty-four bushels of corn a year and established himself "in this out of the way place" where only the proximity of the army could attract customers. He ran the place, the Frenchman said, with the help of his two pretty well-dressed sisters - all, "young people without fortune" - who waited on customers "with grace and coquetry"; but Curtis confided that as soon as he could earn a little money and could get his sisters married, he intended to resume his earlier trade and travel about as a peddler of cloth and trinkets. Chastellux made mention that at the time of his visit there was neither wine, cider nor rum in the house and all there was available was a "vile" cider-brandy with which to make grog. It is said Washington had his headquarters here in July 1977. The tavern was demolished about 1890 for road construction. From Marion Harland, Some Colonial Homesteads and their Stories (1897).

Another three miles brought him to Eagle Valley and the new road laid out by the late geographer to the army. Continuing through what is now the Tuxedo Park Golf Course in a region he termed "extremely wild", he found himself, he said, "on the borders of a lake [Tuxedo Lake], so solitary and concealed that it is only visible through the trees by which it is surrounded. The declivities which form its banks are so steep that if a deer made a false move on the top of the mountain, he would infallibly roll into the lake without being able to recover his balance. This lake, which is not marked on the maps, is called 'Duck Sider'; it is about three miles long and one or two wide. I was now in the wildest and most deserted country I had yet passed through; my imagination was already enjoying this sohtude."

He passed a clearing where a horse was grazing and then encountered two little children, perhaps eight or ten, carrying a little basket and a large book on their way home from school - perhaps to the wilderness abode of one Howard, who lived near the Hasenclever dam at the north end of the lake where the Tuxedo Club now stands.

The Chevalier's journey was to be fondly remembered by later generations of Tuxedoites, and the conjectured vantage point from where he first spied the lake became a subject of friendly contention over drinks at the clubhouse among neighboring landowners claiming ownership of the land; and his presence was further remembered in the name "Chastellux" given to a home on the east shore from where the Frenchman's observation was presumably made.

Descending through the valley of the Wee Wah below the dam, he cantered into the main road at Warwick Brook and at nightfall, twenty-three miles from Pompton, arrived, he said, "at the house of Mr. Smith, who formerly kept an inn, though at present he lodges only his friends; but as I had not the honor to be of that number, I was obliged to go a little further to 'Hern' [Earl's] Tavern, a rather poor inn, where I supped and slept."

A wry smile of philosophical amusement could well have passed across the Chevalier's face within the confines of landlord Earl's hostelry amid the rattlesnakes as he reflected on his denial of entry into Captain Smith's home because he lacked the stature of friend - he, who was a friend of Voltaire, a member of the French Academy and intimate with the salons of Paris, and who in four years would be called marquis. But Chastellux had the happy adaptability of a seasoned traveler and was already too much a servant of the American scene to be annoyed by inconveniences of the highway. On the next day he completed his journey through the Clove and passed across Murderers Creek to visit with Washington at New Windsor.