Part II:
War in the Clove
Chapter 12:
The Scotsman's Regiment

August in the Highlands was a month of uncertainty and alarm. With the disappearance of Howe's fleet from the Delaware and half-certain it was on its way back to the Hudson for a "sudden attack" against the Highlands, Washington made preparations to return with the "utmost expedition", and pressed both Putnam and Clinton to keep the Highlands in a strong posture of defense, specifically mentioning to the governor on August 1 that "A party must be still kept to secure the Entrance of the Clove"; and he stressed the same point a month later in a letter to a colonel on guard duty that "special regard" be given "to the security of the pass leading thro' the Mountains to the Highland Fortifications." In late August the elusive Howe finally appeared at the head of Chesapeake Bay, and with the landing of his army the campaign for Philadelphia and control of the Delaware was joined.

With the anxious days of November and December a memory and with Washington's army gone, the protection of Smith's Clove reverted to the militia and, for three months, to Malcom's newly-raised Continental regiment, one of the sixteen "additional" regiments known by the names of their commanding colonels. Four companies had already been raised in the spring by direction of Brigadier-General George Clinton - some at Fort Montgomery - and by late June were on station at "the Post at Sydman's Bridge" to support the weak garrison then commanded by James Clinton.

Recruitment for the remaining companies was still under way on June 27 when Washington assigned the colonelcy to William Malcom, a thirty-two-year-old Scots-born New Yorker and former importer and ship chandler, and the lieutenant-colonelcy to Aaron Burr, a twentyone-year-old aide-de-camp to Putnam, with instructions that everything necessary be done to complete the regiment so that it could take the field. In late July, Alexander Hamilton was already making reference to Malcom's presence at the Clove. 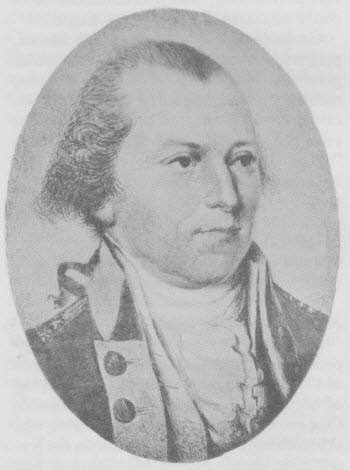 Malcom's letters also carried the familiar heading of "Camp at Rampough" and "Camp Rampough", but the lessening enemy threat from northern Jersey allowed him opportunity to advance his quarters from the fortified position at the bridge to the more civilized confines of Suffern's tavern at the crossroads, from where the Clove could as easily be covered and surveillance extended into the surrounding countryside. Though Malcom's duties were those of a routine line-of-communication station, he was well aware of the uncertain sympathies of many in the region, and it did not take long for him to find the covert activity of some of the disaffected sufficiently disturbing to send soldiers in pursuit of the more troublesome, and within one two-week period he had twenty in custody.