Sir Henry Clinton, Howe's second-incommand, had returned to New York in the sweltering heat of July 5 and was astounded when Howe informed him of his intent to move with the army to Pennsylvania. For three weeks he argued and tried to reason with his superior that he should operate on the Hudson and cooperate with Burgoyne, but to no avail; but despite all, even after the fleet sailed, he could not shake the belief that Howe was deceiving everybody and would return to the Hudson. Morose and withdrawn and saddled with what he considered a "damned starved defensive", Clinton brooded for two months in his New York headquarters, obsessed with fear of Washington and an American attack. 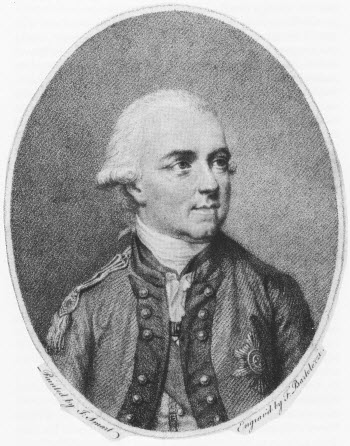 The anticipated arrival of reinforcements from England had much to do with shaking him from his lethargy, and the New Jersey raid was not the sole result of his suddenly aggressive mind. On September 24 and during the next two days a fleet of forty-two sail under convoy of two frigates stood into the harbor and cast anchor, bringing recruits and a distinguished officer personnel and a vast quantity of stores and provisions.

Importuned by Burgoyne in a message received by secret courier at New York on September 29 that an attack or even the menace of an attack upon Fort Montgomery would be of use in drawing away part of the army opposing him ("Do it, my dear friend directly"), Clinton prepared what he considered a "small diversion" to facilitate Burgoyne's movements. Unknowingly, he was to succeed beyond expectation.

On the night of October 3 and 4 he went to the offensive with about 3,000 men and started towards the Highlands by land and water, first to Tarrytown, then to Verplanck's Point, and then on October 6, feinting in one direction, attacking in another, he adroitly out-maneuvered Putnam and transferred his main force to the west shore at King's Ferry and marched across the Dunderberg to capture Forts Clinton and Montgomery, stubbornly but futilely defended by the Clinton brothers and an outnumbered garrison.

Within three days the American Highland defense disintegrated completely; everything was lost to the enemy - the river forts, the Highland fleet, the Peekskill base, the Continental Village, the great chain was severed, the chevaux-de-frise was a failure, and the river was open to the Royal Navy. Putnam retreated to Fishkill, and the Clintons and survivors from the Popolopen forts to Little Britain and New Windsor, all helpless onlookers to what was happening. Two years of expense and effort had come to a bitter end.

On October 15 a "second expedition" of 1,700 men on board ships sailed from the Highlands and continued farther up the river under orders to feel for Burgoyne, cooperate with him, even join him if necessary, but it was a futile mission. Burgoyne surrendered, Kingston was destroyed by fire, and the shambles of burned houses along the river shores marked a route of desolation as far north as the Manor of Livingston.