Part II:
War in the Clove
Chapter 4:
In the Midst of Tories

Huntington's occupation of Smith's Clove on November 15 had taken place none too soon. On the very next day - that, on which Machin appeared to layout the works - Fort Washington and its entire 3,000-man garrison fell to the enemy, and four days later a British invasion force of 4,500 men crossed the Hudson from Westchester to Lower Closter Landing and captured Fort Lee, the garrison barely managing to escape. On the next day Washington abandoned Hackensack and started on the dogged retreat to the Delaware.

After that, everything went wrong for the Americans. The precipitate withdrawal from Hackensack, one physician wrote, made thousands of tories. Nothing but bad news came into Ramapo. The cause was disintegrating in Bergen; people were returning their allegiance to the king. During the two days between November 24 and 26, Huntington was sending word to Heath that the greater part of the inhabitants between his post and Hackensack was friendly to the British and was obtaining letters of protection from the enemy; a loyalist regiment was being raised for service with the British, and some of his own Continentals had been intimidated. 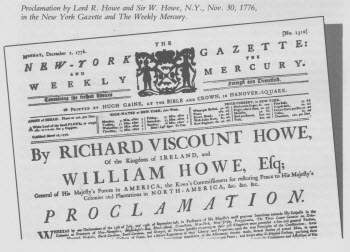 Proclamation by Lord R. Howe and Sir W. Howe granting pardons to the British subjects of the colonies who swear allegiance to the Crown, N.Y., Nov. 30, 1776, in the New York Gazette and The Weekly Mercury.

People sympathetic to the cause constantly distressed him with tales of their fear of the enemy; the tories, insolent and numerous, were so familiar with the country that they could guide the enemy anywhere in the mountains; and it did not take long for news to circulate that some of the Ramapo tories on their way to the enemy had informed people on the road that they would lead the British to the pass in the mountains to surround and cut off the Americans.

Huntington put it bluntly: "I am situated in the midst of tories whome I should fear much more than I do if I thought their Courage equal to their Malice. " He continued "hearty and well" while at work on the fortifications and barracks, and declared that if he had men to spare, he would willingly send a strong party to "inspect" the conduct of the wavering Jerseymen. Even Colonel Hay at Haverstraw had a problem with his precinct regiment: one third of his 280 men were rumored as "disaffected" to the cause.

Fully aware of the alarming situation and of the threats to the Clove garrison, Heath dispatched a militia brigade across the river from Peekskill on the twenty-fifth to take post at Haverstraw to cover the stores and passes with instructions that a regiment or two be sent to reinforce Huntington if required; and at the same time ordered Tyler to move immediately with his regiment across-county to Tappan to assist in the removal of endangered stores. Heath's courier arrived at the dark Ramapo camp at 2:00 in the morning, and at 6:00 Tyler and his men, leaving baggage and cooking utensils behind, departed with orders to send the stores both to King's Ferry and the Clove. To a query from Haverstraw desiring to know if assistance was needed, Huntington replied that Tyler was expected back in a day or two and none was necessary.

Tyler's absence extended to a week, but the vicissitude of camp life at Sidman's was alleviated, if but momentarily, when he and six of his companies (the other two were at Haverstraw) returned in the rain on December 3 with wagons loaded with soap, pipes of Madeira, and ten barrels packed with bottled wine, much of it broken and wasted, but for the soldiery it was enough to awaken the best of anticipation. Huntington dutifully reported its arrival to Heath, but hinted that the soap could be used by his men as much as anywhere else, and "I will venture to say as much of the wine, or at least apart of it. The officers will be glad of some of it on some terms or other."

Things were also beginning to take a turn for the better as far as threats to the garrison were concerned. The main body of the British force that had spearheaded the drive into Bergen was in the vicinity of Newark and Elizabethtown and only rear guard units were left in Hackensack. A "very intelligent fellow" who showed up at Suffern's tavern brought word on December 1 that there were not more than 1,000 Hessians and Waldeckers in the town, which prompted Huntington to pose a question to Heath: "Is it not feasible to possess ourselves of Hackensack?"

The isolation of the post further lessened with the increase of military traffic along the road that came down from King's Ferry. Dispatch riders between Peekskill and the Clove already knew it well, but in a broader sense it had become the only major highway across lower Orange that connected Morristown and the interior of New Jersey with the Hudson and Highland fortifications; Washington himself was already calling it "the western Road" by Kakiat. As the Clove road was the lifeline of the western pass, so, too, was the ferry road by Kakiat the military lifeline of southern Orange.