The voices are silent of the soldiers and militia who marched the Clove, stood guard and camped and campaigned in its wilderness confines, but their letters and diaries survive to recount the dreary years in the western pass through the Highlands. There is, likewise, in the collection of Washington's Headquarters State Historic Site at Newburgh another unique remembrance of the years when soldiers trod the Clove Road - the heavy, decaying, weather-beaten door of the Sidman's bridge blockhouse on which Captain Duncan daily laid hand during the five months of his unhappy command in the winter of 1782-83. Its travail can well be called the case of the blockhouse door.

How long the deserted blockhouse stood in the lonely corridor is not known, but within a short time after the close of the conflict much of the land in the lower Clove where the empty fortifications lay came into possession of John Suffern, the enterprising taverner who played host to the generals and officers of the American Revolution; and sometime during his ownership he removed the blockhouse door and brought it to his home at the New Antrim crossroads and stored it in a milk cellar, where it remained until after his death in 1836 at the respectable age of ninety-four. In 1858, two years after his old tavern had been demolished, his son Edward Suffern (1790-1873), youngest of his eleven children, presented the door as a historic memento to the Hasbrouck House at Newburgh that had been acquired by the State of New York in 1850 as its first historic house museum. When given, it was entered, as determined by available records, simply as a gift of "Judge Suffern - blockhouse." 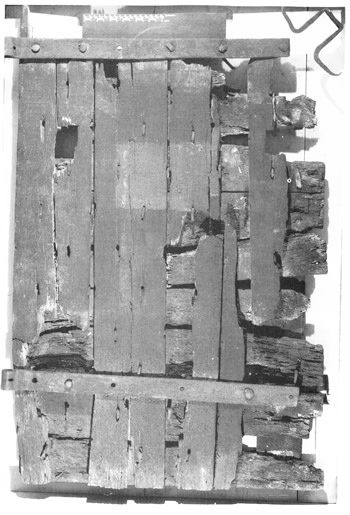 THE BLOCKHOUSE DOOR The last vestige of the Sidman's bridge blockhouse on the Ramapo, erected in 1781 under supervision of Major Jean Bernard Gauthier de Murnans of the Continental Corps of Engineers. Now in the collection of Washington's Headquarters State Historic Site at Newburgh. The heavy door is 6 feet 2 inches in height, 4 feet wide and 3 inches in thickness, crudely but strongly constructed of two layers of 1 1/2 inch oak planking; the exterior face consisting of five vertical planks (one now missing), and the interior of nine horizontal planks of varied widths, fastened with hand-wrought iron spikes about 5 inches long that were driven through both layers from the inside and clinched on the outside. It was hung by two huge wrought iron hinges, 3 feet 8 inches long and 3 inches wide, each with six holes through which bolts were passed to fasten them to the door. A square 3-inch hole was cut through the door near the top. Courtesy of the New York State Office of Parks, Recreation and Historic Preservation.

The spare entry of "blockhouse" carried no further identification as to where the door came from, and it was not until the compilation in 1872 and subsequent publication of an inventory of manuscripts and relics in the Hasbrouck house collection by Edward M. Ruttenber (1825-1907) that it was listed more concisely as the "Door of the 'famous Block-house near Fort Lee in Bergen Woods'", with Ruttenber's added comment that it was attacked by Anthony Wayne in 1780. Interestingly, there is nothing on record earlier than Ruttenber's inventory to suggest a connection of the door with the blockhouse in Bergen Woods in New Jersey.

This structure, specifically, was a loyalist blockhouse erected early in 1780 on the summit of the Palisades near Bull's Ferry below Fort Lee in a section frequently called Bergen Woods, which was unsuccessfully attacked by Wayne on July 21,1780, with heavy American loss - a gallant defense by seventy men against two brigades, dragoons and artillery that won the admiration of the British commander-in-chief and commendation by the King, and from the pen of the gifted but unfortunate Major John André the satirical verses of "The Cow Chase" published by Rivington (the last canto appearing in print on the very day he was captured at Tarrytown).

It may well be that Ruttenber's unawareness of the existence of other nearby blockhouses at Dobbs Ferry (Sneden's Landing) and in the Clove contributed to a misinterpretation on his part that the notation of "blockhouse" in the early record alluded to the better known fortification at Bull's Ferry and it was so-recorded in his inventory and put on record.

The door was a popular exhibit at Newburgh for generations. For years in the late nineteenth century it was on display in an outdoor pavilion on the Headquarters grounds and later was placed in the museum building erected nearby. From 1969 to 1983 it was on loan to the Fort Lee Library as a Bicentennial of the American Revolution exhibit, and in 1991, because of its unstable condition, was sent for preservation treatment to the New York State conservation laboratory at Peebles Island above Albany maintained by the Office of Parks, Recreation and Historic Preservation.

The first to question the veracity of its identification as the door of the Bergen Woods blockhouse was the indefatigable researcher of Rockland history George Henry Budke (1868-1948), who as early as 1923 in a communication to Washington's Headquarters expressed belief that the door did not come from Bergen Woods but from Sidman's bridge, and, after continued investigation, reaffirmed in 1946 in another letter to the Headquarters and in a newspaper article published in the Nyack Journal-News.

Budke may initially have been prompted by curiosity to understand or reconcile what connection - if any - the Suffern family in interior Rockland could have had with a New Jersey blockhouse on the shore of the Hudson that would, supposedly, involve the transport of a cumbersome door from the river to New Antrim over twisting country roads for a distance of more than twenty miles. This, in contrast to a blockhouse located at Sidman's bridge barely one mile away.Budke's research is supported by later investigation by Kenneth R. Rose of Suffern, which he presented in an address before the Revolutionary War Roundtable of the Bergen County Historical Society in 1981; and currently by Dr. Michelle P. Figliomeni, President of the Orange County Historical Society, and the present writer, and with helpful cooperation of Mel Johnson of Washington's Headquarters at Newburgh and Joseph Thatcher of the conservation laboratory at Peebles Island.

Further support favoring the Sidman location is found in a copy of the October 20, 1883 issue of Frank Leslie's Illustrated Newspaper furnished by Claire Tholl of Upper Saddle River, which featured [an] illustration of the Hasbrouck house and a number of small vignette views, including one of the door captioned as from Bergen Woods, on which is a hand-written correction identifying it as from the Clove blockhouse, obviously written by someone knowledgeable of the door's history while still in Suffern possession. Added to this, as noted by Rose, is the fact that the Bull's Ferry blockhouse was burned by its loyalist garrison when evacuated shortly after its defense, which probably would have left little or nothing to be salvaged for preservation.