Part II:
War in the Clove
Chapter 3:
Blocking the Clove

The position, one mile within the valley above Suffern's, was well suited for defense. The Clove at this point constricted into a bottleneck scarcely wide enough to allow the passage of both the road and river and the existence of a small stretch of level ground. At no point within the lower corridor could traffic be as effectively controlled. Washington called the valley "a defile very easily defended." Within two decades the area was to become the thriving center of the industrial hamlet of Ramapo Works.

A few small houses,including those of Shuart and Rogers, stood north of the bridge, and a mile farther the tavern of Samuel and Angneitje Sidman, whose name was given to the bridge and sometimes to the lower Clove. The Sidman hostelry was to be extensively utilized and frequented by the soldiery at the post.

The works laid out by Machin were relatively simple, consisting of what Huntington termed a line of musketry that ran across the valley below the bridge and a "little redoubt" north of the river that covered both the crossworks and the earthworks beyond the stream. From vestiges of a trench that survived into the present century, the musketry line extended from the eastern slope of the Clove to the edge of the Ramapo at the base of the little mountain on which the Motel on the Mountain was later erected, now the Japanese Steak House. 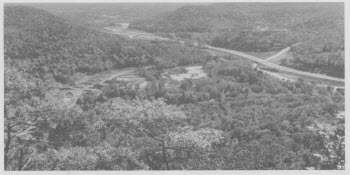 According to one Revolutionary War correspondent, writing in January 1777 from Paramus in New Jersey, the "little redoubt" was "on the other side of Sydman's Bridge," which clearly places it north of the river. This small fortification may have some connection with what Robert Erskine indicated on his maps of 1778-79 as "Old Fort" on the west side of the Clove Road in proximity to the Shuart house and the present junction of Routes 17 and 59.

Huntington, more accustomed to the coastal climes of Norwich in Connecticut than the snake-ridden Clove on what he deemed the Indian frontier, could best describe his isolated post as located "twenty miles in a southwesterly direction from Peekskill on Hudson's river [and] twenty miles from Hackensack town." In reports to Heath, he invariably sent communications from "Camp Ramepaugh."

In weeks that followed, despite interruptions for other duty, Huntington's and Tyler's axmen were busy cutting and felling trees and hauling logs to the barrack sites. Huntington informed his son six days after his arrival that he expected to be there all winter and was at work erecting log barracks. "They make homely but very warm habitations," he said, "Your uncle David was glad to sleep in them on his journey to Susquehanna." In correspondence of the time, the buildings were always alluded to as barracks, never as huts. References were also made to a "store" (storehouse) at the post.

On December 2 Huntington was sending information that he was doing all in his power to forward both fortifications andbarracks, but the barracks were never completed, not because of lack of effort by the Continentals but because repeated interruptions pulled them elsewhere. In January 1777, with Huntington and Tyler gone, a militia general reported that "there are yet no Barracks finished."

Garrison activities were detailed in frequent reports Huntington sent to Heath. On November 23, a rainy autumn day, he was writing that he would not be able to do more than complete "a musketry line" that season, considering that construction of the barracks would take up the rest of his time, and hopefully pointed out that three or four cannon could be placed advantageously "by and by" to command the pass. Once established, the position was variously alluded to in letters and orders as "the post at Sidman's Bridge, "the post near Sidman's Bridge," and "the pass near Sidman's Bridge."

The Clove Road, which passed through the line of musketry, was developing, too, into the military thoroughfare it was to be for the remainder of the war. Huntington remarked in one letter that a "considerable number" of soldiers from the army in New Jersey, sick and well but lacking passes, had drifted through his camp on their way to Fishkill, and only his lack of shelter and provisions rendered it impossible for him to detain them.

Not the least of his problems was that the enlistments of some of his men were expiring at the end of the year. He had anticipated being at the Clove all winter, but within days was pointing out to Heath that by January 1 he would be without men unless something was done to encourage new enlistments. Some of his soldiers were willing to reenlist if given furloughs to return home, which would enable them to be back in time for others to go - but Huntington did add a tone of finality: "for go they will as soon as the term expires."

Five days later he continued in the same vein that he expected to leave Ramapo on January 1, "because I expect that my Troops will at that Period take the shortest Road Home . . . I do not see what we are to do for an Army when next Month expires, but I trust in him who is wise & merciful that he will not forsake us nor leave our righteous Cause to the Wisdom of Man."