The soldiers of the last garrison at Smith's Clove and at the Pompton base were of a regiment that was one of the most interesting on the army establishment. Hazen's was a tough, seasoned outfit and was unusual in that it was not attached to the quota of any particular state, and its formation went back to the days of the disastrous Canadian invasion when the colonials tried to draw the fourteenth colony into the struggle. Hazen, a Massachusetts man, had served at Louisbourg and at the taking of Quebec and was a retired half-pay British officer settled near St. John's when, casting his lot with the Americans, he was authorized by Congress in January 1776 to raise a regiment of 1,000 men. It was recruited at large, though mainly in Pennsylvania and Canada, and because of its unique status was known as "Congress' Own" (James Livingston's 1st Canadian, which had been in the Clove in 1780, had been reduced and no longer existed). When it arrived in November, it had a strength of thirty-five officers and 464 enlisted personnel, a solid core being French-speaking Canadians. 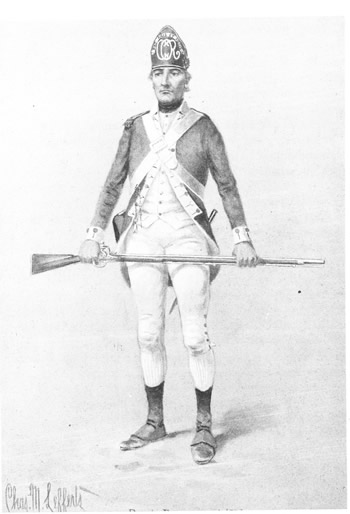 2nd Canadian Regiment, corporal of light infantry company in parade dress 1776, with painted cipher "C.O.R.". (Congress' Own Regiment) on leather cap. Hazen's regiment served as the last garrison at the Pompton entrance to Smith's Clove and at the Sidman's bridge blockhouse in the winter of 1782-83. Water color by Charles Mackubin Lefferts (1873-1923). Courtesy of the New-York Historical Society.

Hazen was no sooner in northern New Jersey than his regiment was selected - presumably - for participation in a waterborne descent down the Hudson from Dobbs Ferry to beat up the enemy positions on northern Manhattan Island that was briefly under consideration at Newburgh headquarters at the end of November and beginning of December. The overall particulars were kept fairly secret and verbal as far as details were concerned, aside from the fact that the foray was to coincide with movements in Westchester and a simultaneous raid across Long Island Sound from Connecticut by Major Benjamin Tallmadge and a force of 700 men planned for the night of December 5.

Acting on orders from the commander-in-chief to obtain the most minute intelligence on the British fortifications on upper Manhattan, Lieutenant-Colonel William Stephens Smith, on station at Dobbs Ferry, sent a report and a plan for a surprise attack to Washington on November 27 after a reconnaissance from the Palisades. Tallmadge's descent onto the island failed because of winds and storms which prevented an embarkation, and Washington immediately abandoned the river raid; but that it was given more than cursory attention is evident from an undated headquarter memorandum outlining the movement, which specified in cryptic fashion that Hazen was to have his regiment ready for inspection "at the Yellow House" on the day preceding the night of the surprise, and on the same day a relief for the regiment was to march into the Clove from the camp at New Windsor and, after stopping overnight "in the Houses at and nearest to Smith's tavern," it was to continue on the next day and "they are to reach the Block House"; and the officer in charge, the proposal said, "may be told Hazen's Regiment will join him the day following and that Officer will deliver over his instructions to him." Hazen's regiment was probably intended for service on the river or as a support unit on the Jersey shore. Whatever the case, nothing came of it.

Throughout 1782, everybody had been hoping that it would be but a matter of time before peace came (the preliminary articles were signed in November 1782; the final treaty in September 1783), but the military posture in the field, nevertheless, was being strictly maintained. Hazen had orders continuing into 1783 to maintain patrols for security, but his activity centered more on stopping enemy deserters, stragglers and suspicious persons and in attempting - fruitlessly, for the most part - to curtail the open illicit trade with the enemy that was being carried on by the Jersey farmers.