On Monday, March 28, 1768, William Wear walked into the small store in the hamlet of Coldengham1 and purchased six items "for [the] funeral of Patrick McCay." They consisted of five and one half gallons of rum, seven pounds of sugar, a pound of allspice, four pounds of tobacco, and 72 pipes with which to smoke it.2

The Daybook This is only one of almost 4000 entries that are recorded in a surviving Daybook of this country store from August 1767 until November 1768. Over a period of slightly more than a year, 277 persons with unique surnames visited the store. Their accompanying relatives, slaves, and friends are also recorded. The items which they purchased shed light on their wealth and how they lived.

This 250 year-old 450-page book resides in the New-York Historical Society (N-YHS), its pages so fragile that it can only be viewed via a copy on microfilm. Her treasure chest of historical and genealogical information lay virtually unmined as no digital index existed.....until this year.

In late 2016, the author arranged with the N-YHS to allow transcription of micro-film images of the Daybook. Transcribers were recruited from genealogical, historical, and family groups. Each transcriber was assigned batches of ten pages to enter into a web form. The first Phase of transcribing (individual purchased-items were not transcribed in this Phase) started in January 2017 and was completed in May 2017. All of this was done "on-line" from home computers at the transcribers' leisure. The transcribers were spread across the country, from Seattle to Connecticut. Without them, this important new resource would not be available. 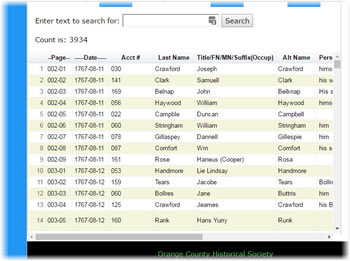 Coldengham The store belonged to Cadwallader Colden Jr. and was located in "Coldengham" which was part of the Precinct of Wallkill in Ulster County (It became part of the Precinct of Hanover in 1772 and is now part of the Town of Montgomery, Orange County.) Colden's father had so-named the 2000-acre3 family estate after his ancestral home near Coldingham, Scotland. A hamlet bearing this name still exists on Route 17K between the Village of Montgomery and City of Newburgh. The exact location of the store is unknown, however in 1767, the year the Daybook begins, Colden was building a new home for himself on property adjacent to the main thoroughfare between the farms along the Wallkill River (near the Goodwill Meeting House) and Newburgh. It is plausible that the store was in a structure on or close to that property.

Thirty years after the date of this Daybook and a year after the death of Cadwallader Colden Jr., David Galatian would draw a map of the Town of Montgomery. The town's area included most of the Colden estate. The map shows the locations of residents whose surnames are common in the Daybook: Blake, Bodine, Cahill, Colden, Crist, Dorcas, Erwin, Felter, Galatian, Graham, Hill, Hunter, Kidd, Miller, Milligan, Milspaugh, Moore, Moul, Newkirk, Nickelson, Robison, Roose, Stephens, Smith, VanKeuren, and Weller. The homes of A. and D. Colden appear on the far east edge where the Stone Mansion of Cadwallader Jr. stood. These are undoubtedly Cadwallader's fourth and fifth sons, Alexander and David, who were known to be respectively "still liv[ing] at home" and "in a small house just by." 4 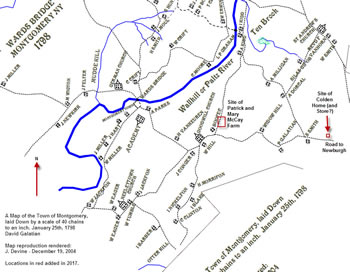 The original of this map hangs in the Town Government Center of the Town of Montgomery, New York. This is a reproduction by J. Devine. It has been reoriented to point North and includes the locations of the McCay farm of 1768 and Colden home. For some unknown reason, Devine's map clips off the homes of A. and D. Colden which are in the original map. They were located at the red square on the right added by the author.

The Stone Mansion The house was still under construction as evidenced by entries in the Daybook. The mason, John Miller, was paid on September 10, 1767 "for 9 1/2 days plastering cellar kitchen and middle room."5 On November 19th, John McClaughrey was paid for making 244 sash lights (window panes) and the pillars/rails for the porch.6 As late as September 1768, Colden was paying the mason, Miller, for 21 days of plastering the previous fall.7 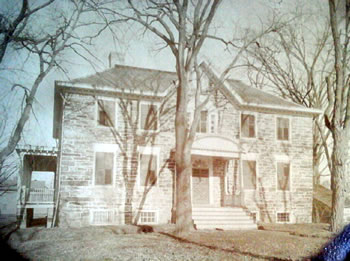 View from the south of Cadwallader Colden Jr.'s home prior to the addition of a Mansard roof in about 1870. The home was built in the same period as the Daybook entries. Photo courtesy of Robin Assenza.

Enabling a Cash-Poor Economy On May 6, 1768, John Miller (mason) was debited six pounds and three shillings for "a horse bo[ugh]t at Widow McCay's v[e]ndue."8 A vendue, or auction, was common after the death of a freeman who died with outstanding debts. This entry in the Daybook illuminates how the store functioned much as a bank. The debit to John Miller's account at the store would also be entered as a credit on Patrick McCay's outstanding balance. John Miller was to "give his note with security to be paid in 6 months." The store bought cash and loaned cash. It sold sundry items on credit and purchased farm produce, most often as a credit against the seller's store debits. For example, on October 14, 1768, Jacob Crist was paid 16:13:7 "in full of accounts for his flour & book account to this day."9 His account was #176, which was at that point closed and a new account (#246) opened on which he was debited five shillings for a tea pot and a gallon of rum.

Store Clerks Colden employed several clerks in his store with varying degrees of calligraphic skill. They all had unique spelling preferences and handwriting styles. This presented a challenge to the transcribers who could face as many as three different styles on a single page. The author's surname (Campbell) was spelled eight different ways in the Daybook and in no instance was it spelled using its modern spelling. In fairness to the clerks, there were no dictionaries at the time, and unless you had a biblical name, there were few agreed upon spellings for many names. The abbreviations and shorthands presented another challenge. Some were easy like Wm and Doctr. But, then there were Dd (believed to be shorthand for 'Delivered' [to]) and Sunds (believed to be shorthand for 'Sundries').

Colden is believed to have made the majority of the entries himself. His handwriting was studied in his journal of 1779. That style matches well with the major handwriting style in the Daybook. His "T"s have a flourish at the start and end. His "M"s appear as three vertical slashes. The protrusions on his "E"s sag like collapsing shelves, and he seldom crosses his "t"s. The second clerk has much the same style as Colden but is not as crisp. Perhaps this clerk is just the tired Colden. The third clerk is imagined as tall and skinny as is his writing. The last clerk had the best handwriting and spelling. His flourishes are exaggerated and light can be seen through the loops of his "l's and "e"s. Perhaps Colden hired a young student from the prestigious Riggs school in Coldengham. The school was advertised on May 4, 1767 in the New York Mercury10 and sons of the landed gentry, such as Philip Van Cortlandt, were known to have attended this academy in the woods.11

Store Clientele Ruttenber's History of Orange County lists "names from town records in 1768" in the area of the Town of Montgomery.12 Of these 208 full names, 93 shopped at the store during this period. However, 9 of the 23 most-frequent-surnames in the Daybook are not mentioned in the "town records" tabulated by Ruttenber. (see the non-bolded names in list below.)

Table of most-frequent-surnames in Daybook. Names mentioned in "1768 Town Records" are bolded. Surnames which appear in the 1779 Tax Assessment of Hanover have an asterisk.

Statistics The digitization of the Daybook allows for easy statistical analysis of the entries. For example, for the 450 days between the start and end of the journal, the store had entries on 380 of them. Given that the store was not open on Sundays, the store had customers year-round on 380 of 386 possible days. Some of those customers came at least weekly (as seen above). On 1484 out of the 3934 visits, the shopper was not the account holder, rather a relative, neighbor, employee, or slave. This piece of information is a genealogical gold mine. There are 52 mentions of slaves, including "Susan" of the Herrald household who had her own account at the store. There are mentions of thirteen occupations, two funerals, seven widows, three Captains, and two Lieutenants. During those 450 days, £4797 of commerce was transacted, with little cash changing hands.

Items Purchased Phase I of transcription did not include the items purchased. Only names, dates, occupations, titles, who 'picked-up,' and purchase totals were entered in the database. The second Phase is now underway. Each item purchased (or sold) during a store visit will be transcribed. Of the 1358 items entered so far (about 40 store-days), 211 are rum, amounting to close to 400 gallons. Phase II will paint a quantitative picture of the cash flow of the community, what crops and livestock were grown, what fabrics were woven, what services were bartered, and what luxury items were popular.

The Funeral Who was Patrick McCay, the man mentioned at the beginning of this article, whose funeral was being catered by William Wear? The McCay farm sat just north of the Goodwill Meeting House (on today's Route 208), just south of the author's 5th great-grandfather, Samuel Campbell's farm.13 Perhaps Samuel sat next to William Wear as they smoked their pipes while Samuel's wife, Mary, comforted the widow, Mary McCay. Unfortunately those details are unknown, but without the Daybook the possibilities could not even be imagined.

Access to the Data The public, on-line, searchable "Phase I" database will be available on the Orange County Historical Society website starting January 1, 2018.

Next Issue of Journal!

The Next Issue of the OCHS Journal is now accepting articles for consideration.

Lydia Sayer Hasbrouck and "The Sybil"
by Amy Kesselman