The principal product of the Clove Furnace was foundry pig iron, stamped with the brand name "Clove." This iron was used for making stoves and fine hardware. The ore used in this furnace was mined primarily in the Greenwood group of mines. The sulfur in the ore had to be removed by roasting in kilns, but limestone flux was not always required as one of the blast furnace ingredients. The high quality ore used at this furnace was often self-fluxing. 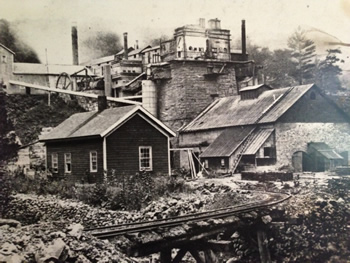 The West Point Foundry at Cold Spring depended upon pig iron from Clove Furnace for the manufacture of gun barrels. The famous Parrott Gun, designed by Robert Parrott, was one of the most effective pieces of armament produced for the Union forces during the Civil War.

The close of Greenwood Furnace No. 1 in September 1871 marked the end of charcoal ironmaking in the Ramapo region. Clove Furnace continued producing high quality pig iron after the close of the Civil War. It gained fame for one continuous blast running from May 26, 1871 to June 14, 1881. During this period 101,245 gross tons of pig iron were produced, 75% of it first grade.

Clove Furnace was finally closed down in 1885 when iron ore from the West became more economical. It was allowed to die out even though the furnace was still filled with coal and ore. This last charge may still be seen in the furnace casting arch.

The site of Clove Furnace today looks vastly different from the way it looked on that fateful day when it closed in 1885.