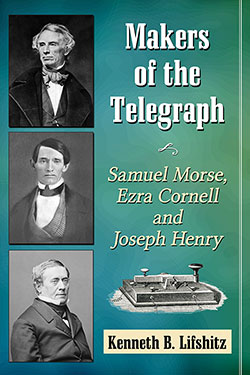 The single-wire telegraph revolutionized long distance communication but it was not the brainchild of one inventor, Samuel Morse. His colleagues and employees-specifically Ezra Cornell and Joseph Henry-made crucial contributions. Examining the careers of the three men and the key events, this book presents Morse as primarily a businessman and consolidator of ideas who, frequently in conflict with his associates, sought to present the telegraph as a uniform system under his sole imprimatur. The battle between Morse and Cornell over the invention of the magnetic relay was central to the drama. What emerges is a complex portrait of three ambitious and brilliant innovators and the age in which they lived.

Kenneth B. Lifshitz has lectured widely on such topics as the great chain across the Hudson and The Franklin Marble. Also a bass player, he has performed with local and regional symphony orchestras. He lives in the Catskill region of New York.